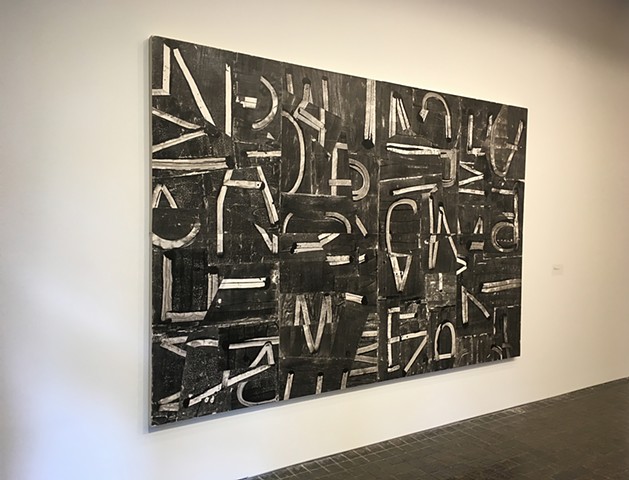 From the gallery press release for the exhibition Nacirema in the David Winton Bell Gallery at Brown University, Providence, RI, June 8 – July 7, 2019:

Toby Sisson: Nacirema delves into generations of African American history, from W.E.B. DuBois to mid-century black social clubs, to reveal the complicated roots of patriotism. [it is] an art exhibit that explores a kind of bittersweet patriotism expressed by generations of American writers and artists of color. Nacirema [is] a series of black and white prints created with pigmented beeswax, thin Japanese printmaking paper and a heated palette that acts as a printing press.

Deconstructed American by Toby Sisson mixes up the letters in "American," as the founders of the Nacirema Club did in the mid-20th century. To Sisson, patriotism is a complex subject. When Sisson was a child growing up on the South Side of Chicago and in Minneapolis, her father belonged to Nacirema Clubs, African American social organizations founded in cities all over the U.S. To club members, the term “Nacirema” — or “American” spelled backward — perfectly captured the duality of African American existence: While they were American citizens, they often faced discrimination and felt overlooked. ‘“Nacirema” is this idea of alienation and estrangement, yet also pride in being an American,” Sisson said. “While one is part of the larger body, one is also separate in many ways from that larger nation or idea of nationhood.”

“Nacirema” was a new term in the mid-20th century, but the idea it conveyed wasn’t original. A half century earlier, in 1903, the African American writer W.E.B. DuBois had written, “One ever feels his twoness — an American, a Negro; two souls, two thoughts, two unreconciled strivings.” Sisson, who is biracial, felt a strong connection between DuBois’ thoughts and her own. She was struck, too, by the timelessness of his words. “This text drove my interest in exploring what has changed and, frankly, what hasn’t changed over the last 100 years,” Sisson said. “Right now, there are conversations everywhere about what it means to be part of the nation or not. You can’t open the paper or scroll through a news feed without reading about borders and nationality and identity politics.”

In Sisson’s art, she plays with text, mixing up the letters in “American” as the Nacirema Club founders did. She creates squares of rough-hewn patterns using encaustic — a kind of pigmented beeswax — and layers of paper, taking inspiration from the unique patterns created by the famous African American quilters in Gee’s Bend, Alabama. “Their quilting patterns were very aligned with compositions of contemporary art, but they go way back in history, like W.E.B. DuBois’ thoughts on race in America,” Sisson said. “On the surface, the patterns may seem quite different, but if you look a little closer, you find interrelated ideas.”

Sisson said her work is meant to reflect the “enormous complexity” that is being American. “Being an American... it’s not simple patriotism,” she said. “It requires a long, hard look at history and an openness to ambiguity. My work is similar. It requires more of the viewer; it doesn’t tell people a direct message but instead requests people to bring their own stories to what they see.”